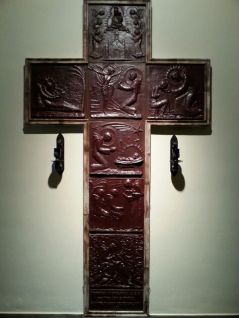 With these words we call to mind the centrality of the Cross in our lives these Lenten days and now especially in Holy Week.   This morning in religious education one of my third grade students asked, “Sister, what is the difference between the cross and the crucifix?”  Answering him reminded me of the numerous depictions of the cross we see in our world today.  One of the special crosses we reflect on in our Franciscan world is the San Damiano Cross from which our Lord, Jesus, spoke to Saint Francis asking him to “rebuild the Church, which as you can see, is falling into ruin.”

Another unique cross we Franciscans ponder, at least in the Hankinson Province of the Dillingen Franciscans, is the ceramic display in the hallway of the provincial house in Hankinson.  This has relief sculpture details the life of Saint Francis of Assisi in six panels arranged in the shape of the cross.  Often when touring visitors at the convent I have the privilege of telling highlights of the inspiring story of the life of our founder, one of the most beloved saints of Christianity.

The biographical panels depict Francis, who before his conversion, abhorred the sight of lepers and would ride several miles out of his way to avoid them, when one day he met a leper, was moved to get off his horse and embrace the man, realizing Jesus had disguised himself as a leper to meet Francis.  He later wrote that from then on what he had despised now became sweet and he was overjoyed at the mercy of God! Francis went on to live with the lepers for some time in the early days of his conversion, before the Lord gave him brothers.

Another panel depicts Francis sending his brothers out, two-by two, to preach the Gospel as our Lord commanded.

Various other scenes from the life of Francis are memorialized in this piece of art designed by our German born Sister Edelwida, whose father had a ceramic factory near Dillingen.  The sculpture, made in 1935, was shipped to the U.S. in blocks and placed/cut into the wall of the hallway leading to chapel.  The reminder when I walk by: “who are the lepers in my life? Have I embraced them?  Have I had a conversion, a turning point in my life, to see Christ in each person I encounter?”

One of my favorite panels is on the left crossbar.  It shows Francis lying on the ground, with his hand raised in blessing.  He had asked his brothers to take him to the hill outside the city of Assisi so he could bless the people once more before he died. In recent Franciscan history, in the 1950’s, the Siena Testament was discovered in which Francis dictated: “Write that I bless all my brothers, those who are in the Order and those who will enter it until the end of the world …” I take this blessing personally!

Would that more of us would embrace the cross, the lepers and the whole world in our prayer as Saint Francis of Assisi did.  May the holy days this week and the time of the Tridum be filled with a realization of God’s deep, abiding mercy, for you and those whom you encounter!

One thought on “Lift High the Cross, the Love of Christ Proclaim …”

The imitation of Christ, in love, is the way & goal of our vocation.

As Franciscan Sisters of Dillingen, we are to “serve God our Creator peacefully, prayerfully, and zealously, praising and honoring Him to the consolation of all believing souls.”

We are listed on: